Do You Have a 64-bit Processor?

The difference between 64-bit and 32-bit is size. A 64-bit register can store 264 different values, while a 32-bit register can only store 232 values. One of the main reasons this matters is that 32-bit Windows will only see around 3GB of RAM (memory) even if your computer has more. That’s like owning a 300 horsepower car but only being able to use 100 horsepower.

My father-in-law’s computer was running slowly and he asked me for help. I discovered that he was using a 32-bit version of Windows 7 but his processor was 64-bit capable. He was only able to use about half of his 6GB of RAM. He installed Windows 7 64-bit and his usable RAM doubled. The problems he was having went away.

But the primary reason to use 64-bit is to be able to use all of your RAM. My computer has 8GB of RAM but I would only be able to use a little over 3GB if I was using a 32-bit version of Windows 7.

How to you know what your processor supports? 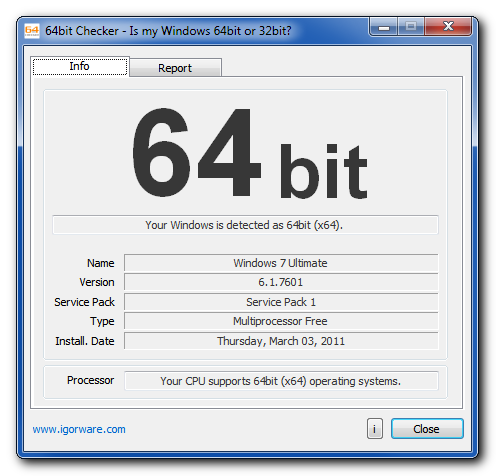 64bit Checker will tell you if your processor supports 64-bit and what version of Windows you’re running. It’s a very simple program, but quite useful.

To use 64bit Checker, download it using this link: http://download.igorware.com/64bit-checker.exe and then run the program. The two main things to pay attention to are:

There are three possible scenarios.